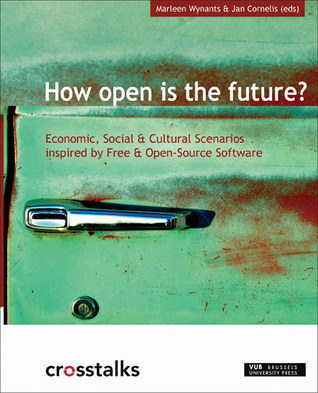 How open is the future?

Ever since Richard Stallman, founder of the Free Software Foundation, received his Doctor Honoris Causa at the Vrije Universiteit Brussel, Crosstalks started to explore the probing issue of “Free and Open Source Software” from an interdisciplinary and wide-angled perspective: an excellent starting point for its kick-off event.

The results were published in the first Crosstalks book. How Open is the Future? (VUB Press), edited by the university’s Vice-rector Research Jan Cornelis and Marleen Wynants, Operational Director of Crosstalks. The look and feel of the book appeal to a multi-coloured public, as it offers a constructive and innovative look on the boundaries of intellectual property, as well as new and open forms of collaboration, not only situated in an academic and industrial context, but in musical and artistic spheres as well. Characteristic for Crosstalks is that both the copyleft- side of the story as the proprietary, Microsoft -like approach are taken into consideration. The book is released under a Creative Commons License and presents an interdisciplinary mix of transparent perspectives on the digitalisation of our society while reflecting on the limits of property and public domain on the level of knowledge, information and technological and digital informatisation.

“It is an excellent production indeed – both in the variety and quality of the contributions assembled, and as an artefact.”
(Quote from Paul A. David, Professor of Economics and Senior Fellow, Stanford Institute for Economic Policy Research, Stanford University)

“How open is the Future?” thus became a platform for contrasting but also complementary perspectives from the industry (MySQL, Microsoft), internet pioneer Tim O’Reilly, from policymakers (Belgian, European) and from toplevel scientific researchers (VUB, Stanford & Oxford, Paris Dauphine & Jussieu, Universities of Utrecht and Maastricht and the Sony Computer Science Lab in Paris). These articles are completed by a series of case studies from Extremadura (Spain), the music industry (from the Grateful Dead to Napster) and the cultural subculture (from Rastafari to Mongrel) en with two interviews, one with Richard Stallman and one with VUB scientist Lode Wyns about the patenting of life.

You can BROWSE THIS BOOK on Google Books!